A Village Mama
Hamilton, Ontario, Canada
As a mom to two girls, I often heard "it takes a village to raise a child" but it also takes a village to make a mom. If it wasn't for the love, support and random sharing of other moms I don't think I would be enjoying this journey of motherhood quite as much. PR Friendly contact me at avillagemama@gmail.com

Saying Goodbye at the End of Life

Less than a month ago I went to visit my parents and spent the day with them just sharing time together and going out for lunch.  At 91 years old my dad was not as steady on his feet as he used to be and his hearing was not great but there was no indication that I would be sitting at my computer crying and trying to find the words to convey the struggle I am having with his impending passing.

Two weeks ago today my mother called me and asked me to come and help them out, my father wasn't well.  Half-way from my house to theirs I got a call from my mom telling me she was going to call EMS when I got there to take my dad to the hospital.  Having seen him just a week prior I couldn't imagine what the problem was and told her to hold off and I could drive him when I arrived.  She told me he couldn't go in my car, we need to call an ambulance.  When I got there he was obviously sick and looked so weak and frail I couldn't believe my eyes.  We called EMS and as is usually the case the Fire Department got there first.  They were kind and helpful and got my dad situated and on some oxygen then EMS took over and we left for the hospital.  At the emergency, my dad was checked and tested and slipped in and out of being lucid.  It was crushing and I couldn't understand how this could happen so quickly.  We found out that he was suffering from pneumonia and had a heart attack (not of the traditional nature) and would be moved into a room once one came available.  One of the doctors asked if he had a heroic measures plan, I had no idea what he was asking and said no.  I send a text to my brother who was at home dealing with the passing of his mother in law just days prior to find out what the doctor was talking about.  What I now understand is that  they wanted to know about a DNR (do not resuscitate) and the use of heroic measures to keep my dad alive.  We were lucky that my parents had made these decisions for us and it was clearly laid out in his power of attorney.  That said, we were shocked to be asked and I pondered if my dad was going to make it.

The next day my dad was moved up to a room and they started treatment for his illness and he seemed to be responding but he also had stopped eating and drinking and seemed to come in and out of lucidness.  I read up and heard that this was often a result of an illness like pneumonia and I held out some hope that maybe he would get better once it was resolved.  The conversations over the next week with doctors and other hospital staff often left me bewildered and trying to understand what the next steps were.  In the end, it seems he would need to go to long term care and if they could not place him immediately then he would stay in hospital as a co-pay.  We made some decisions about possible locations and I felt as though we were moving forward until the day the light dawned on me after we had a talk with the discharge planner and CCAC. My father was not getting nourishment and if he went to long term care they would not offer an IV to replace fluids.  It would be up to him to eat and drink and we knew that he already was not doing this and the minimal amounts he was taking were not enough to sustain him.

I always believed that quality of life was important and felt that if you no longer had an adequate quality of life then the decision to go peacefully into death was the right one.  What I didn't realize is that even when your love one makes that decision for you, executing it is the most heart wrenching choice to make and there isn't anything that can be said or done that makes you feel better about making the right choice.

Last Tuesday we switched my dad to comfort care, he is being kept comfortable and pain free through sedation and the last time I saw him awake I fixed his pillows and he smiled up at me and touched my face.  It took every ounce of self control not to burst into tears but that may be my last memory of my dad awake and alert enough to interact with me.  The last few visits he has been sedated and hasn't roused but I could sit with him day and night, I find it strangely peaceful and to be honest it's also selfish, I don't want to miss my chance to say goodbye one last time.  I live in a constant state of anxiousness, afraid the phone will ring and he will be gone and I will have to come to terms with the fact that my dad won't be there for me any more.  I am a grown woman with a family of my own but he will always be my "daddy" and my protector.  He was always a kind, wonderful person and I would find it hard to believe that there were many people that met my dad that didn't like him.  So now as we await the when instead of the "if", I reflect and am thankful that my dad was able to walk me down the aisle and know my daughters (I waited a long time for both - my fault, not his) and I cherish the fact that I had my dad in my life for so long, some are not so lucky.

My dad has chosen not to have a visitation or funeral so there is no time or place for goodbyes and so as I write this blog through tear filled eyes I say my goodbyes, my I love you's and you will always be in my heart.

My father passed away today (Tues Dec 10th), my brother was there and said he went peacefully and I was able to come and say my final goodbyes.  Rest in Peace sweet daddy <3 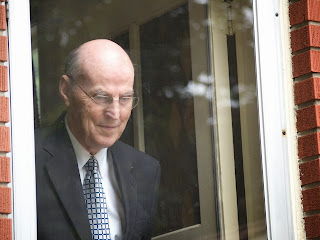 Posted by A Village Mama

Email ThisBlogThis!Share to TwitterShare to FacebookShare to Pinterest
Labels: end of life, goodbyes